Every Thursday, Ooligan Press invites a poet whose work is included in Alive at the Center, our forthcoming anthology of poetry from Pacific Northwest writers, to blog for us. This week, we are pleased to feature Elee Kraljii Gardiner, a poet from Vancouver, B.C. Please enjoy her post!

I have been thinking about how I read the city. A plaque at Hastings and Hamilton Streets in Vancouver is dedicated to Lauchlan Alexander Hamilton, an employee of the Canadian Pacific Railway who drove his surveyor’s stake into the ground in 1885, “and commenced to measure an empty land into the streets of Vancouver.” This historicized narrative is for me a ridiculous dart: he was not standing on “empty” land. He was standing at a random coordinate amidst thousands of years of experience.
When I check the weather on my iPhone the data comes from “Musqueam Indian Reserve 2” rather than “Vancouver.” This coded reminder of where I am fascinates me because part of reading is thinking about what is not written. I’m aware of not knowing what the Musqueam people negotiated—or didn’t—concerning the weather station and its labeling. I don’t know what is meant by “2” or if there is a “Musqueam Indian Reserve 1” or “3” that might also hook into the weather app. 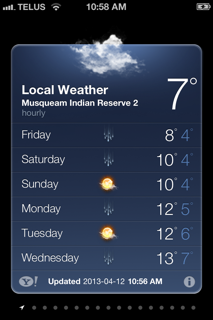 If the reader is complicit in determining a text, so too is she responsible regarding the city. How do my movements through Vancouver edit my reading of it? When I moved here from Boston, I used to drive to my boyfriend’s house a few times a week along the length of Hastings Street to Boundary Road where the city ends.
Hastings Street was my track, my route, a spinal line completely different from the curlicues and elbow corners of the streets where I grew up. It plunges through the Downtown Eastside (DTES), where it is lined with brick buildings rather than the modern green-tinted glass towers I abhor. I suppose by sticking to my route I was searching for the familiar, carving a groove. Rereading a line. Translating.
As I drove though the neighbourhood decoding and recoding what I saw as a passerby, I began to recognize macro and micro schedules of a community. I read signs. If I noticed a swell of activity on the streets I sometimes understood what could have caused it: the weather, a festival or shelter hours. I absorbed the transition from office towers to blocks of lower buildings giving way to row houses then detached houses, next houses with small yards — and then I reversed the narrative process of density on my trip back home to the West End.
The DTES is a neighbourhood under pressure from developments that don’t serve the majority of current residents. It’s an area that has been through waves of change: at the turn of the last century seasonal labour created cycles of boom-and-bust. In the 50s and 60s the DTES was a lively shopping district. After the closing of mental health facilities and the withdrawal of social support in the 70s and 80s, and the influx of cheaper and more potent street drugs, the neighbourhood became a low-barrier site for people handling mental health, addiction and poverty-related issues. Today it is many things, including an optimistic community that represents itself through political activism and arts initiatives.
I believe in Borges’ idea of an infinite number of readings of a text. For the last six years I have spent a few hours each week at the cross section of Main and Hastings Streets where Hamilton planted his first stake and where I write in longhand with a roomful of people. In our writing sessions it is as if we are slowing something down, trying to locate and elongate a moment amidst a rush of change outside.
In 1857’s Fleur de Mal, Baudelaire wrote of Paris, “The city changes shape faster than the human heart.” In Vancouver’s case we can witness the transformation in three minutes and thirty-five seconds. This video, filmed from a shaky bike handlebar, comes closest to one reading I hold. It’s impressionistic yet real-time, conducted from the margins of the south side sidewalk against the flow of traffic so that even the viewer familiar with the area is momentarily disoriented. The background music is a New Age panpipe composition referencing the mythic quest. And when the video concludes it does so with a fade to black, the bike and camera still in motion as if suggesting the trip, and the reading, are never finished. 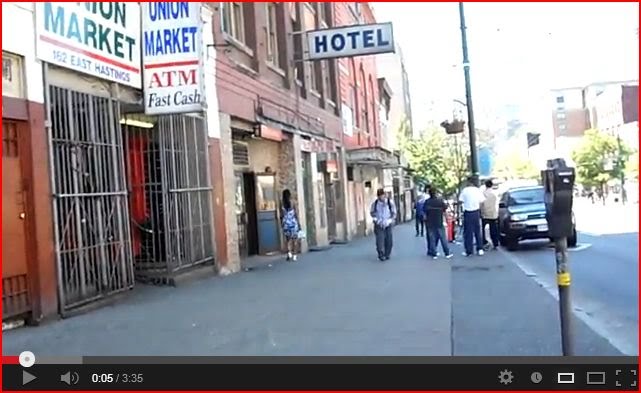 Elee Kraljii Gardiner directs Vancouver, British Columbia’s Thursdays Writing Collective, a nonprofit program in the Downtown Eastside. She is the editor of five chapbooks and the co-editor (alongside John Asfour) of V6A: Writing from Vancouver’s Downtown Eastside, an anthology from Arsenal Pulp Press (2012). Elee is affiliated with Simon Fraser University, sitting on the Advisory Council of The Writer’s Studio and is the recipient of the 2011 Lina Chartrand Poetry Award.

Elee’s poem,“Stealing Anatomies,” is—in her words—a response, “to a poem written by a witness of the moments after the death of a young woman murdered by drug dealers at the Regent Hotel. His piece was brave and respectful and I was called to add my voice to his. I completed the poem at Hedgebrook Writers Retreat, a women-only space, and incorporated a list of a dozen book titles from the library shelves written by former guests of the retreat center. I feel the poem is stronger for its inclusion of underlying support from women in the literary community at large.”
This poem is featured in the complete Alive at the Center anthology as well as the Vancouver edition. Both books are currently available from your favorite local bookshop and online retailers.
*Ooligan Press typically uses American English spellings. However, because of the location-specific focus of Elee’s post, Canadian spellings have been used throughout.