Every Thursday, Ooligan Press invites a poet whose work is included in Alive at the Center, our forthcoming anthology of poetry from Pacific Northwest writers, to blog for us. This week, we are pleased to feature Henry Hughes, a poet from the Portland, OR area. Please enjoy his post!

Poems, like all life on earth, came from water. Gilgamesh dives the Sumerian tides for a magic herb, Homer sings his “wine dark sea,” and the earliest Chinese writers filled the Shijing with drunken verses on the Yellow River. American poetry also emerges from Dickinson’s “sweet …swamp with its secrets” and from Whitman’s “world below the brine.” So when I find myself involuntarily pausing before organic pet salons, and bringing up the rear of every Portland protest, and especially whenever my depression gets such an upper hand that it requires a strong moral principle to stop me from pulling Sherpa hats off hipsters, then I know it’s high time to get to river or sea. 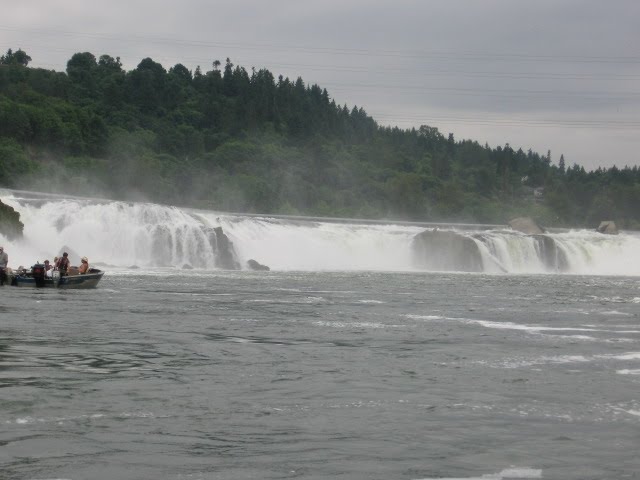 One dismal winter afternoon, I headed for Oregon City with my friend, Paul, a photographer and engraver who struggles with depression and drinking, the two forces often achieving a kind of reservoir-river dynamic that feeds a remarkable flow of fine work. Dangerous? Yes. But if you love and need art more than pristine health, what does it matter? “Who can part the water from the wine?” Rumi happily wrote before the Islamic prohibition.

Paul and I had a few drinks at the American Legion and talked to some of the men about the recession, the river, and the closing mills. One man, a recent veteran, told us “the world’s first paper mill was in Bagdad.” Another man shook his head and said, “If we could give up paper and oil we’d be all right.” 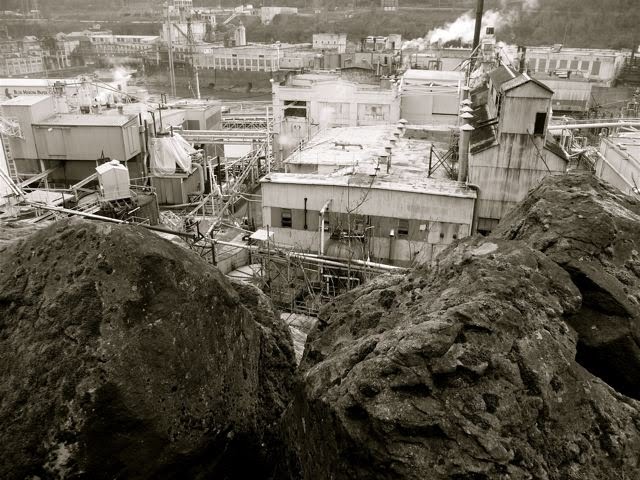 Paul and I walked across the road, checked out the smelly steampunk circus of the Blue Heron Paper Mill scheduled for closure, took photos and notes, then drove down to the water. It was a drizzly, dark Friday. We cracked a couple beers and stared at the foamy river. Something large rolled on the surface, and we glimpsed a bright fin. Sturgeon? Or maybe the first spring salmon heading up to Willamette Falls—one of the most naturally stunning and grimly industrialized sites in America. “How do you feel?” I asked Paul. “Better,” he said. “Water, paper, beer, fish—it’s all connected.”

Some friends say I shouldn’t drink with Paul, that it’s not helping. But when I went to see him a few days later, he had printed a dozen superb photos from our outing. He also finished a meticulous wood engraving from which he pulled a print of a beautiful salmon churning through the water after a fly. “Next time we’ll make a few casts,” I said, and read him the draft of my poem, “Paper Mill.” We were happy with each other’s work. He lifted a bottle of cheap whisky off the shelf. “What you say?” he cocked his head. “Sure,” I smiled. “But let’s mix it with a little water.” 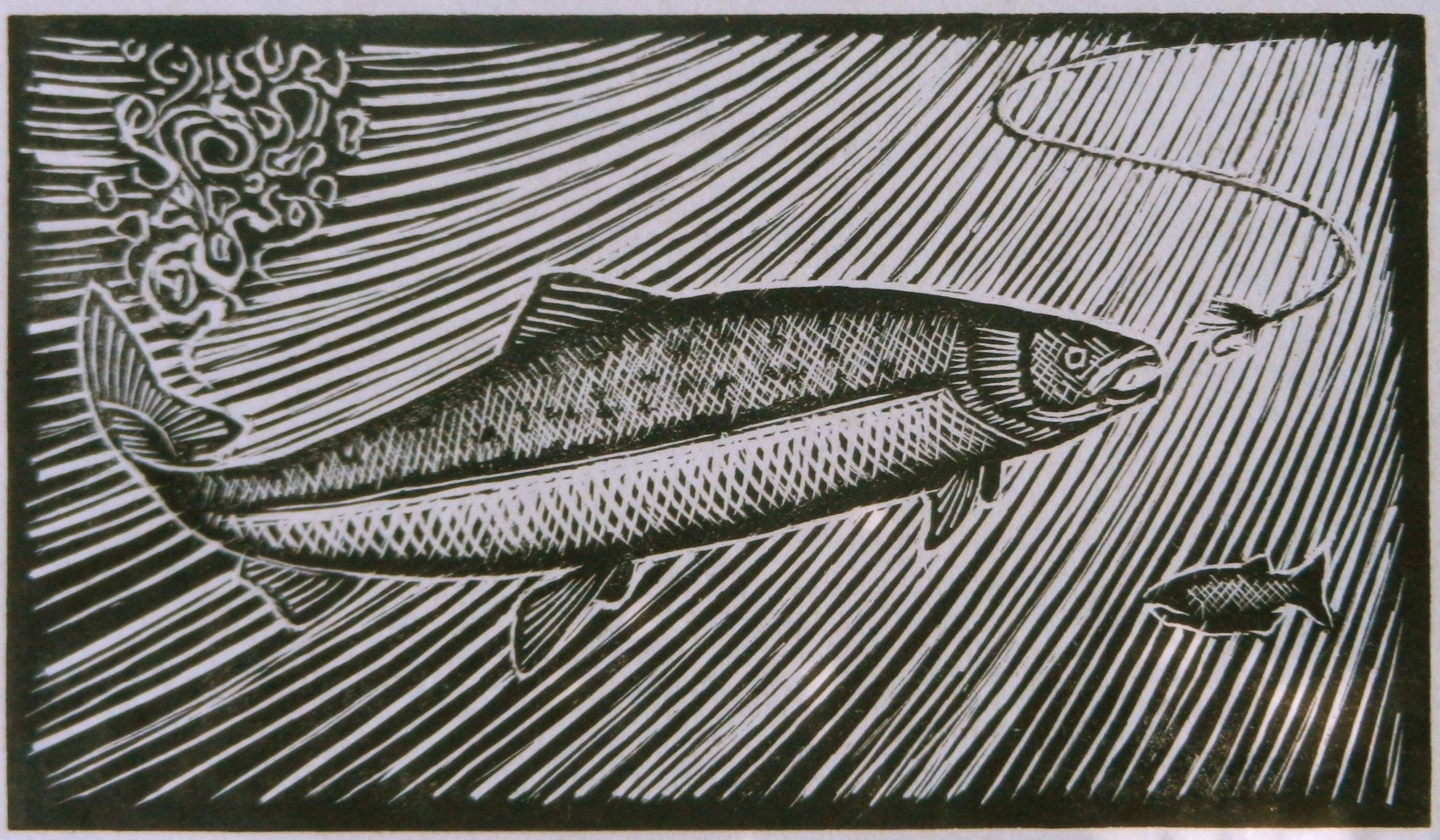 Henry Hughes teaches literature and writing at Western Oregon University. He grew up on Long Island, New York, and he has lived in Oregon since 2002. His poems have appeared in Antioch Review, Carolina Quarterly, Shenandoah, Southern Humanities Review, Seattle Review and Poetry Northwest, and are represented in several anthologies including Long Journey: Contemporary Northwest Poets published by Oregon State University Press. His first collection, Men Holding Eggs, received the 2004 Oregon Book Award. His second book, Moist Meridian, was chosen by Robert Pinsky as a finalist for the 2011 Oregon Book Award. He is the editor of the Knopf Everyman Library anthologies, The Art of Angling: Poems about Fishing and Stories About Fishing, and his commentary on new poetry appears regularly in Harvard Review. Connect with Henry at his website.

His poem “Paper Mill,” which will appear in both the Alive at the Center anthology and the Portland edition, was part of the Shutter Lines project, a poem-photo collaboration with visual artist, Paul Gentry published by Cloudbank Books in the spring of 2012.

Both Alive at the Center volumes will be available April 1, 2013.