On Friday night, poetry fans gathered at Richard Hugo House, a literary hub in Seattle, for the first of three city launches of Alive at the Center, Ooligan Press’s latest release. The poetry anthology gathers some of the best and brightest of poets from Portland, Seattle, and Vancouver B.C. At the Seattle launch, the overall feeling was that of celebration, thankfulness, and community. Over twenty poets featured in the Seattle section of Alive at the Center read their featured poems. 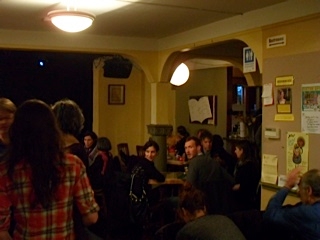 The three Seattle editors — Kathleen Flenniken, David D. Horowitz, and Cody Walker — introduced each poet during the marathon poetry reading, which opened with Kate Lebo’s homage to Richard Hugo House’s own marketing director Brian McGuigan, “A Poem By Brian McGuigan,” and ended with Frances McCue’s poem of family and daughter love, “Kingship.” Brian McGuigan introduced the event by recapping his involvement with the project — he wrote one of the blurbs for the back of the book. He commented that this book and event were perfect for anyone who loves to stalk poets, as it gathered them all in one central location. The event was filled with applause and admiration, with many poets discussing the other poets in the collection they were excited to be listed next to.

Highlights of the night included when Jeremy Halinen, who read the poem “Afternoon Above I-5,” prefaced his poem with the offering of a blessing to everyone in the room: that the poets would write the poems they were meant to write, and that they would find the audiences who were meant to read their poems. Seattle poetry slam legend Karen Finneyfrock brought the room to an eruption of cheering with her ode to spring, “Monster.” Personifying spring as a teenage girl, Finneyfrock talks of spring’s longing to be loved like summer. The poem was a perfect fit for the rainy Seattle day. 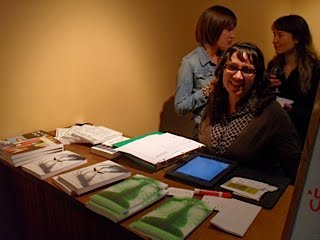 Since April is National Poetry Month, there is no better time for us to keep celebrating Alive at the Center, all our wonderful poets, and the community spirit of poetry. Join us for our next two launches: April 12th in Vancouver B.C. and April 19th in Portland.