Every Thursday, Ooligan Press invites a poet whose work is included in Alive at the Center, our anthology of poetry from Pacific Northwest writers, to blog for us. This week, we are pleased to feature Jesse Morse, a poet from Portland, OR, who is currently pursuing a PhD in Colorado. Please enjoy his post!

It is impossible for me, for example, to stare dumbly at this cloudy Texas twilight (on a layover at the Houston airport) and not be reminded of my six years in Portland, Oregon. For the rest of my life, grey sky and drizzle will be internalized this way. I left Portland two years ago to pursue a PhD in Creative Writing at the University of Denver. I’ve thought about Portland three or four times a week since.

As one stumbles through life and poetry, into one’s mid-thirties, the places one has lived and left grow, if not in quantity, than in abstraction. Some people never leave. Poets tend to. I have left other places: Oberlin, Ohio; Takamatsu, Japan; Cupertino, California. All places I have lived. All places in my rear view mirror; places I think about rarely. This has been impossible with Portland. The leaving has been anything but leaving. 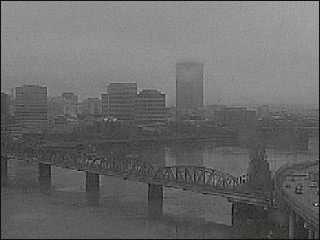 And it is poetry, I contend, that lies behind my inability to do away with Portland. To live and write in a city, to make poems and attempt to order the world through those poems, is to grow intimate with that city.

Chuck Palahniuk writes in Fugitives and Refugees that everyone in Portland leads three lives, works three jobs; yet watching Portlandia one might imagine that everyone in Portland retires by the age of twenty-five. I found these two notions, seemingly in opposition, to be entirely true. Before moving to Denver I was a milieu counselor at a residential rehab center for teens, I worked two nights a week at a restaurant, and tutored high school students at night and summer school. Somehow it all fit together, with ample time to write, play guitar in a band and host occasional poetry readings (things you might do when you retire). I can’t imagine a city more encouraging of this wide variety of life and art than Portland. Every friend I had did something artistic, while also doing something else. Not one friend owned a television.

To write poems inside the academy, I’m finding, is very different. I haven’t been able to wrap my head around it. Every poet I have met in Denver, myself now included, affiliates himself or herself with (i.e. depends on) a university. Some are tenured professors of creative writing. Many teach composition to barely eke out a living. One or two have administrative positions.

Unquestionably, the creative writing tradition in the greater Denver/Boulder/Fort Collins area is astounding, with three well-respected MFAs full of notable faculty (UC Boulder, Naropa University, Colorado State University) and the Creative Writing PhD at Denver University repeatedly ranked first in the nation. Nevertheless, I proffer that these programs overshadow another poetic that emerges from the server at the pub, from the barista, or the record shop. And while Denver is chock-full of these historically vibrant birthplaces of poems (think of Kerouac and Cassady watching jazz at El Chapultepec, few poets immersed in the academy bother with them. Or rather, the few consistent reading series around town that I frequent seem to always have the same poets from the same part of the same universities in attendance, and little to no one else.

Undoubtedly this has less to do with Denver itself (as in, I simply haven’t found events or met poets who have no interest in the academy—they must surely be here) than that I am, for the first time in eight years, inside an ivory tower. I’ve spent the last two weeks dealing with an arrogant undergraduate student instead of writing poems, for instance. I am as implicit as anyone. Though I wasn’t implicit in Portland. Or at least, I don’t remember being so. And maybe that, in the end, is why Portland hasn’t left me. The life I made there was my own. The easy difficulty of the city forced it on me. The life I’ve made here is, thus far, more common.

Finally, like anywhere, Portland has its problems. The homogeny is stultifying. And bumper stickers that read “Keep Portland Weird” embody an aesthetic that is anything but. Yet, in my perhaps too romantic mind, I remember the city much like a proper reading of a poem: multifarious, continuing. To leave Portland has been to ingrain the city to an astounding degree, to believe that poetry from the Northwest is poetry made of life.

Though now pursuing a PhD in Creative Writing at the University of Denver, Jesse Morse will always consider the Northwest one of his three homes. He’s had various pieces published in various places (most recently in Amerarcana and Golden Handcuffs Review), and Portland-based C_L Press put out a chapbook called Rotations, with a lot more Eric Chavez poems of a completely different nature. Jesse spends much of his time playing outdoors with his labradane Hank.

“Eric Chavez in Portland,” is featured in the complete Alive at the Center anthology as well as the Portland edition. Both books are currently available from your favorite local bookshop or online retailer