Every Thursday, Ooligan Press invites a poet whose work is included in Alive at the Center, our anthology of poetry from Pacific Northwest writers, to blog for us. This week, we are pleased to feature Sandy Shreve, a poet from Vancouver, B.C. Please enjoy her post!

“Crows” began with a chance encounter on my way home from work one overcast February afternoon in 1998.  An older man walking ahead of me slowed to a saunter as I approached, as if waiting for me to catch up to him.  When I did, he peered at me from under his nondescript cap (beige, like his baggy trousers and jacket) and pointed to a couple of vacant lots beside us, asking if I’d noticed there were more crows around than usual.  “Not really,” I confessed, looking at what seemed a rather normal number pecking at the ground.  Then he told me how hundreds upon hundreds had arrived earlier that day, covering the field, the trees, the street—and then took off, darkening the sky.  “I think they came for my neighbour,” he said, nodding at an old house across the way.  “She died last night.” 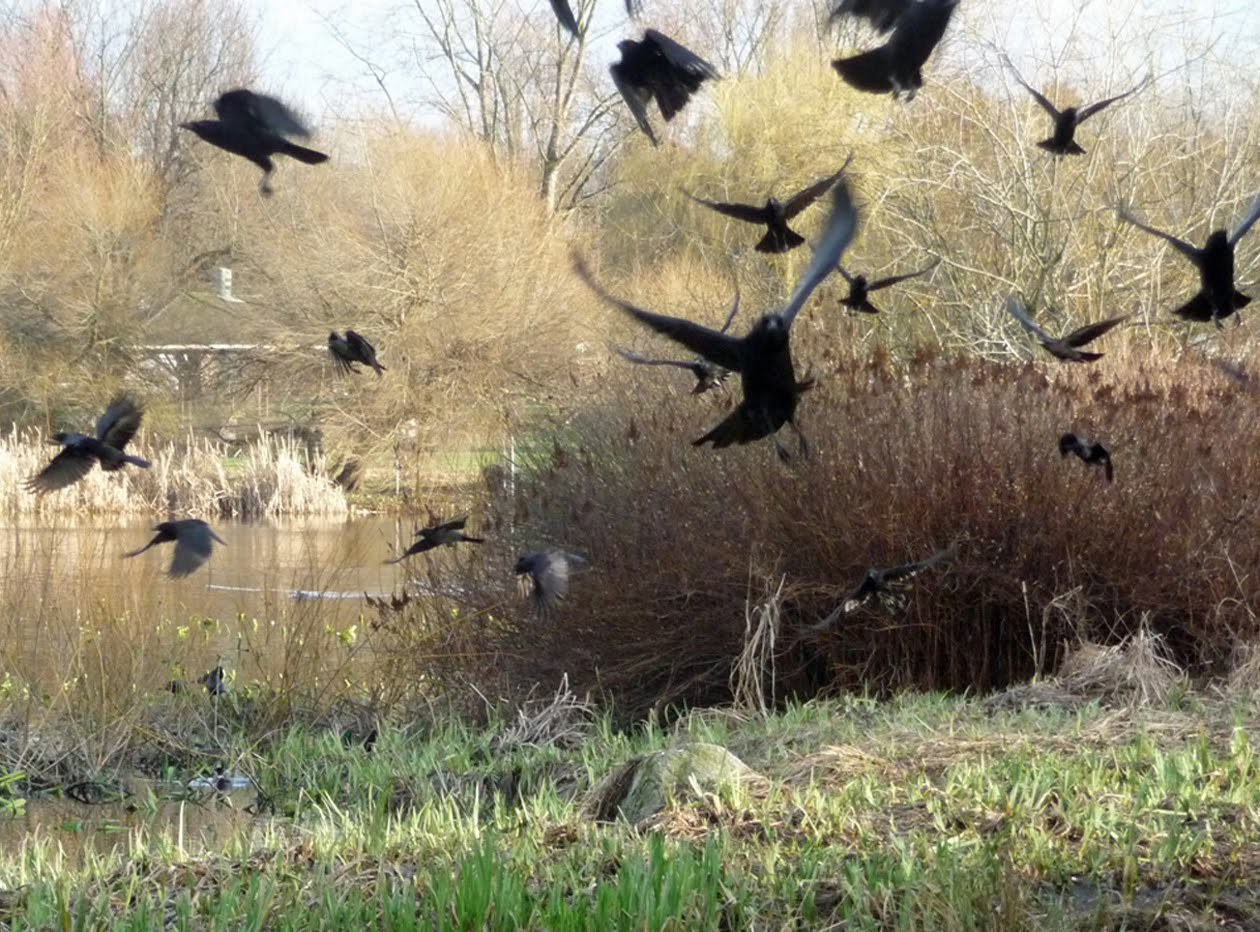 A flock of crows, photograph by Sandy Shreve

We walked along for awhile as he talked about his neighbour, how he’d known her for decades, that she’d been a kind and generous woman.  How she’d been ill for some time, which perhaps explained the overgrown garden, the collapsing fence.  Then he told me that when we die, crows come to escort our souls to heaven; how he hoped, when the time came, they’d show him the way, too.  A few paces later, he turned off the path and I continued on my way.  But the man and his words stayed with me.

That night, I sat down to write.  Eventually I came up with what I felt was a perfectly good anecdotal poem that conveyed the tender care the man had expressed for his neighbour, the comfort he’d found in the crows’ visitation.  The images, the details, the story all seemed to work—and yet, I was deeply disappointed.  Something was missing—but what?

My third book, Belonging, had been published the previous year and I was still finding my way into new work.  Belonging was family-centred; the poems were mostly in the narrative and anecdotal veins and had been well-received.  I’d been aware for some time, though, that much as I was perfectly happy with the whole collection, my favorite poems were the ones that suggested rather than elaborated a particular event or story; the ones that relied more on metaphor than description.  As I thought about this, it clicked.  The poem I wanted to write was to be found, not in that afternoon’s encounter per se, but in whatever it seemed to represent for me.  The poem I wanted to write had to begin at the end of the anecdote I held in my hand. 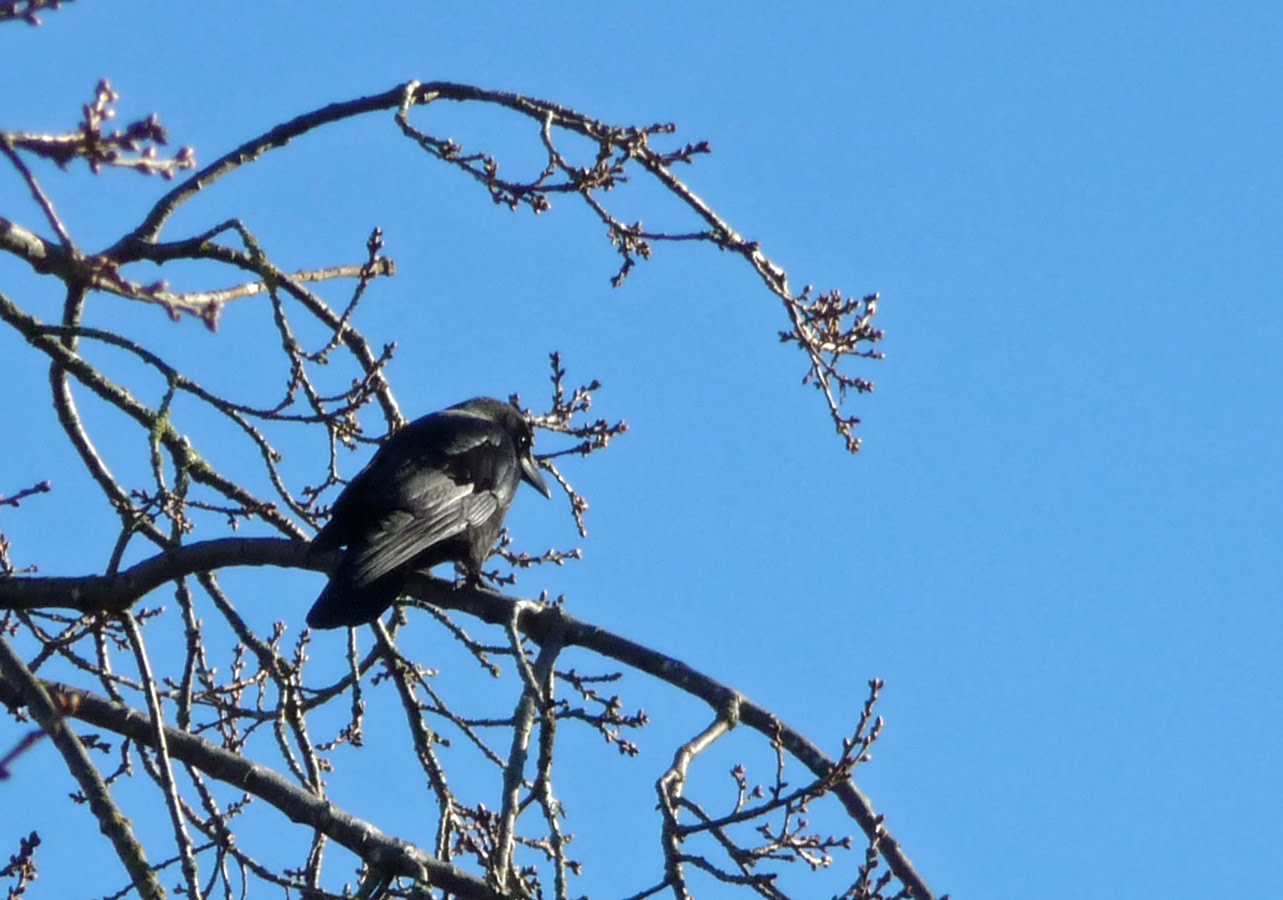 I’ve long been fond of crows.  Growing up in New Brunswick, I’d often wake to their boisterous heckling  across the Tantramar Marsh.  Others were annoyed by the “noise” but I heard the possibilities for a new day in those voices.  Yet I’d never written about them; at most, crows made a passing appearance in a few of my poems.  While I knew about and admired their intelligence, I’d never read up on what they might stand for in world cultures or religions.  Given what the man I’d met earlier in the day had said, I realized I needed to look into this, so I turned to one of my favourite reference books—Barbara G. Walker’s The Woman’s Dictionary of Symbols and Sacred Objects (Harper and Rowe, 1988)—and read every crow entry.  From Walker I learned, among other things, that to the Roman ear the crow’s call sounded like their word for tomorrow—and so, to them, this bird was “a symbol of the future.”

With Walker’s information, my own enchantment with crows, their generally bad reputation (as messy, as loud, as bullies and thieves), and one man’s comment about crows and our souls all at the back of my mind, I picked up my pen and began again…

(A few years ago I combined some of my poetry and photographs to make video-poems.  You can listen to “Crows” on my YouTube page.) 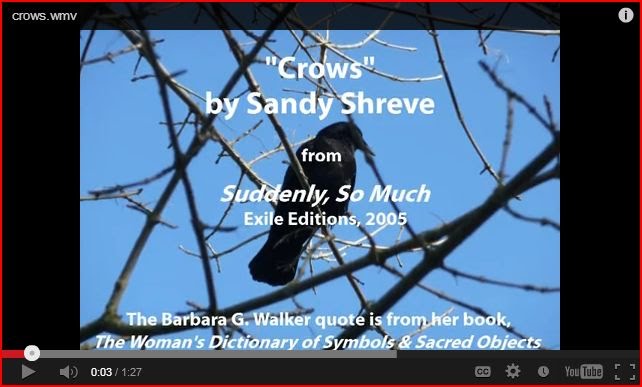 Sandy Shreve’s most recent poetry collections are Suddenly, So Much (Exile Editions, 2005) and a chapbook, Level Crossing (Alfred Gustav Press, 2012). Her other books include the anthology In Fine Form—The Canadian Book of Form Poetry (Polestar, 2005), co-edited with Kate Braid. For more information, visit her website at: http://sandyshreve.ca/

Sandy’s poem, “Crows,” is featured the complete Alive at the Center anthology as well as the Vancouver edition. Both books are currently available from your favorite local bookshop or online retailer

*Credit for the photograph of Sandy Shreve that accompanies this blog post goes to photographer Heather Rhodes.