Every Thursday, Ooligan Press invites a poet whose work is included in Alive at the Center, our forthcoming anthology of poetry from Pacific Northwest writers, to blog for us. This week, we are pleased to feature Kaia Sand, a poet from Portland, OR. Please enjoy her post!

As a Daunted Human Creature of This World, I Write Down Its Details

Poem as ledger, adding up. Ledger, perhaps from the Dutch ligger and legger—to lie or lay—to bring down from the upright position. Ledgers are about stacking horizontal things, timber in scaffolding, a rod across thatch, a slab stone over a grave. Setting lines upon lines, an open-ended equation.

I am the keeper of accounts repeats Irena Klepfisz in her poem “Bashert.”

And this is how my poem “Tiny Arctic Ice” began, and continues. As a daunted human creature of this world, I write down its details. The final sum is elusive, is abundant, spills over the form.

Things all around me are relational—my coffee table my mom found 40 years ago at a Wisconsin library, a jacket my husband’s uncle designed, a red rose beaded by my daughter’s sister. Nostalgia tugs. Things vibrate with relation.

“Tiny Arctic Ice” is a ledger without summation, tracking things that passing fleetingly by me, and things that logjam in my possession. I add lines, remaking the poem’s material form, recasting to usher in changing contexts.

I think about Dennis Brutus, beloved Dennis Brutus, the late South African poet who took “Longing”—a poem he wroite a ½ half century ago about, as he puts it, “the end of a sad love affair”—and recast it as a poem that addresses Global Warming.

As the Copenhagen Accords neared, and as his death neared, he read that poem aloud, his line “My heart knows now such devastation”  no longer as an line arrowed toward an individual beloved, but now, a line arrowed toward all of us, all of us in the future. Not a longing toward the familiar, but a longing, a love, for all the people he does not know, but for whom he devoted so much activism addressing environmental and economic injustice.

Reading the poem as having a “long biography,” Peter Middleton considers the “poem as a probably unfinished, and even possibly interminable, business, and that will be its value and pleasure, a continuing struggle, a renewing music.”

I do not mean that I approach all work this way, but I approach “Tiny Arctic Ice” this way. I bring intentional slowness to the poem. “Thing power, then, is the power of slowness,” said –Jane Bennett in her talk, “Artistry and Agency in a World of Vibrant Matter at The New School. Its efficacy is exemplary of its patience, stability and duration.” The vibrant thing of the poem, vibrating with being in the world.

So as I revise the poem, I build it materially anew, creating— each time— new choreographies of reading.

Early on, I built the poem as a teabag—Green Tea imported from China—one page per line, small pages, small gestures, the poem built from the far-flung trade of things. 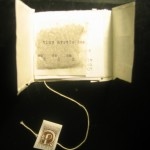 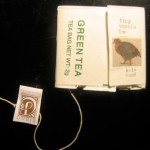 At another point I had traveled to Switzerland and read it at Cabaret Voltaire, so  considering the extravagance all air-travel, I recast the poem as a series of paper airplanes, working with Kathrin Schaeppi to translate, and write new lines in Swiss German, and my daughter and Susana Gardner’s goddaughter tossed the airplanes into the crowd. I’ve also recast this as a bouquet of local flowers, contrasted with the airplanes of roses flown over Quito mountains in the poem, and as an accordion of pages made from the Financial Times of London. 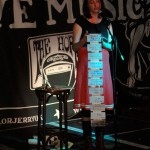 As I added my most recent lines, I dwelt on e-waste, affected particularly by the way—in her fabulous poetry collection Hoarders—Lara Durback reframes the export of broken technological waste as a kind of far-flung hoarding by consumers. My efforts to cut down on paper waste is dependent on my possession of devices, and good devices, up-to-date devices that function fluidly as I roam. These up-to-date devices are preceded by semi-obsolete devices. I am linked to all these things that I have once possessed.

As I thought about remaking tiny arctic ice into a new thing, I had this consumptive impulse to hurry over to FreeGeek, or Goodwill, or Scrap—all reuse stores in Portland—to acquire other people’s e-waste. And then I caught myself, remembering own e-waste, that drawer of cables and broken cameras and dongles that Apple has planned into obsolescence, so I dipped into the drawer and began to write the poem anew.

I presented a version of these remarks at the Ecopoetics Conference at UC Berkeley, February 23, 2013 as part of a creative round table with Allison Cobb, Alicia Cohen, Jen Coleman, CA Conrad, and Jen Hofer.

Kaia Sand is the author of the book Remember to Wave (Tinfish Press, 2010)—also the name of a walk Sand leads in North Portland. Both the book and walking tour investigate political history and current goings-on. She is also the author of the poetry collection interval (Edge Books, 2004) and co-author with Jules Boykoff of Landscapes of Dissent (Palm Press, 2008). Her magic show about the financial collapse–A Tale of Magicians Who Puffed Up Money that Lost its Puff–was just published as a chapbook (Above Ground Press, 2013). She participates in the Dusie Kollektiv, recently creating a broadside of her embroidered 8 ft. drop cloth poem. She is a member of PEN American Center, and she teaches in the Portland State University Honors Program, where she is poet in residence. In collaboration with Garrick Imatani, she is artist in residence at the Portland Archives and Records Center.

Kaia’s poem “Tiny Arctic Ice” will be featured in the complete Alive at the Center anthology as well as the Portland edition. Both books will be available April 1, 2013.