Every Thursday, Ooligan Press invites a poet whose work is included in Alive at the Center, our forthcoming anthology of poetry from Pacific Northwest writers, to blog for us. This week, we are pleased to feature Paulann Petersen, Oregon’s current Poet Laureate, who resides in Portland. Please enjoy her post and her 2013 Valentine, which follows.

“There isn’t really such a room with a connection to this struggling poet—is there?”

This is the opening sentence of a letter dated 23 March, 1993, a letter I’d just received from Bill Stafford, that struggling poet extraordinaire. He was asking about my classroom at West Linn High School.

I was in the spring of my second year at West Linn, a markedly crowded high school facility. The first year I taught there, my classroom was an AV cart I pushed to a different place each period, using other teachers’ rooms during their prep times. The second year, I got a classroom of my own, and the privilege of naming it. The West Linn English Department had a Jane Austen Room, a William Shakespeare Room, a Robert Frost Room, and a number of other rooms named—by the teachers who occupied them—for major literary figures.

It was my turn. What writer did I want to honor? I was a teacher who wrote, a writer who taught. What better writer/teacher/luminary than Bill? What better star than the one shining close to home, in Lake Oswego, just a few miles north of West Linn? So, the brass plaque above the door leading into my newly acquired classroom said THE WILLIAM STAFFORD ROOM.

By that spring of 1993, I’d had several months to settle in. On one wall, I’d put a number of Bill’s poems and photographs of him. But he wasn’t the only person feted in that room. On other walls, I’d posted my students’ poems, and dozens of photographs they’d taken. I put up student paintings and drawings I’d purchased. And big posters of Jimi Hendrix, Billie Holiday, Bob Marley, Tina Turner, and Miles Davis.  And programs from West Linn theatrical productions.

Then more posters of Janis Joplin, Thelonius Monk, Gracie Slick, John Lee Hooker, Dexter Gordon, and Judith Jamison. The room buzzed with color and pizzazz. I’d painted a wild sunburst on the wall, surrounding the clock. Thai kites flew up and around the florescent lights.

I wanted to celebrate this showcase of creative personalities, so I wrote to Bill asking if he’d be willing to preside at a dedication party. In my letter to him, I briefly described the room, naming some of the others honored there, wondering if he’d be put off by such an eclectic, unconventional bunch.

He wasn’t. He agreed to come. 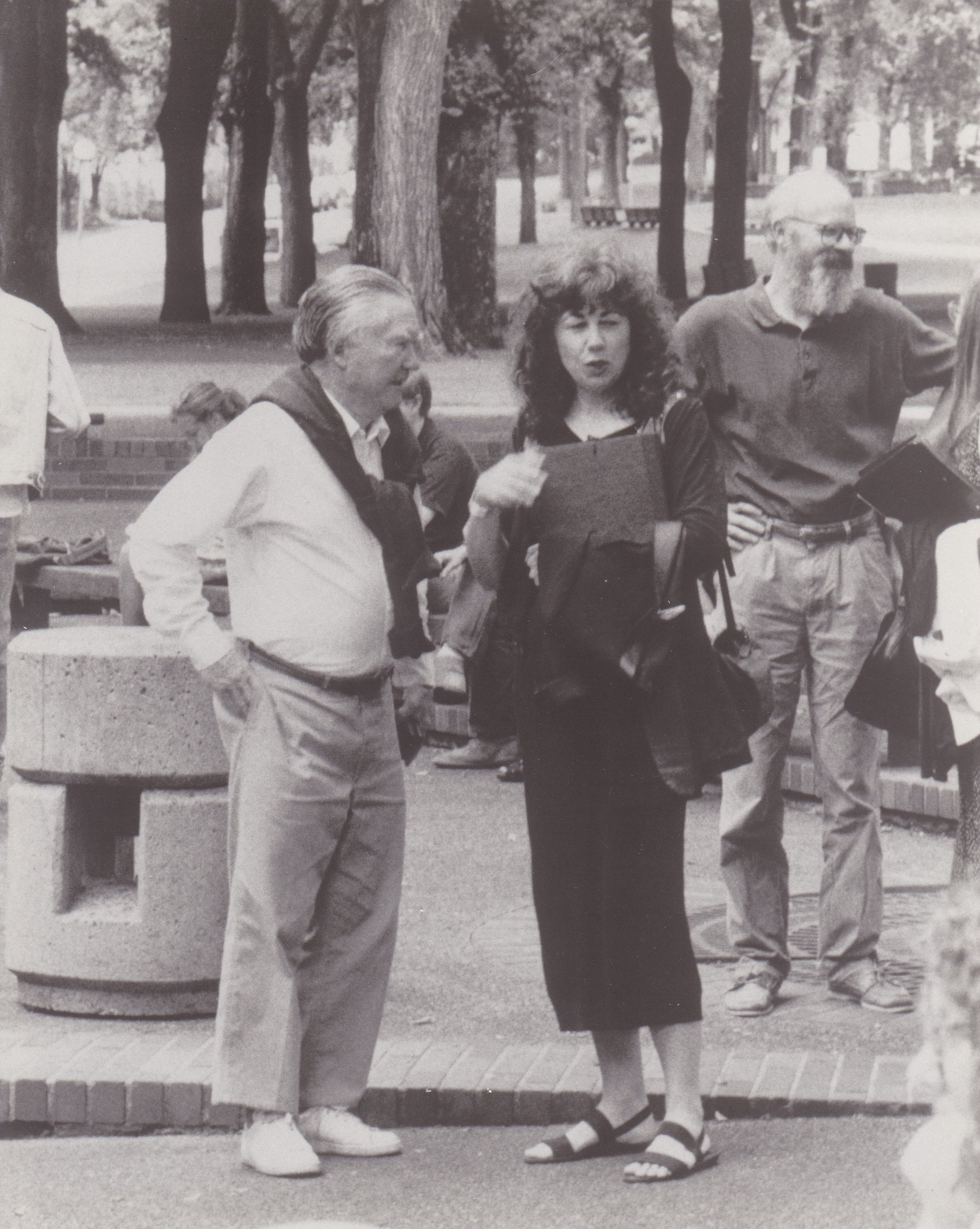 The late April dedication day was stormy and raw. I filled the room with bouquets of lilacs from home. The department teachers pitched in to provide cookies and punch. An hour before Bill was due, the power went out. As soon as my last class left, I scrambled—pushing the refreshment table up near the room’s only outside window, hoping that its bit of natural light would be enough for Bill to read the few poems he’d said he’d read, enough to spotlight him. But why did I bother to worry? The power came back on shortly after Bill arrived.

People gathered in the room—teachers and students, a few with requests. Anne, our Fulbright Exchange teacher from Australia, asked him to read “Fifteen,” a poem she’d taught for years Down-Under. She was astonished that this world-famous poet had come to visit. A National Book Award winner, a former U.S. Poet Laureate was right there in the American public high school where she’d been assigned. She couldn’t quite believe it. Neither could the rest of us. We were gathered to dedicate a room named for a poet and peace activist who was extraordinarily dedicated to our community of readers and writers and teachers. We had come to honor him. By being there—in his easy, unassuming way—Bill was honoring us.

Bill read the poems people requested. He talked with our students, our teachers. He signed books, even putting his signature below “Fifteen” where it appeared in the text book Anne had brought with her. The afternoon grew late. Bill took his leave.

That day I’d brought a pot of Star-Gazer lilies to school, a gift for him to take home to Dorothy, a small way of saying thanks. Standing in my classroom doorway, under the WILLIAM STAFFORD ROOM plaque, I watched him walk away—down the long hall, toward the outside door. He had the pot of lilies in his right arm, tucked up against his ribs. With each step, those pale blooms bobbed from side to side.

That was April. He died in August.

Later, after the memorial gathering for Bill at Lewis & Clark, Kim Stafford and I exchanged a few words about the dedication of that classroom at West Linn High. I told Kim I was still a little amazed that his father would take the time and trouble to be there that late April afternoon. Amazed at his unpretentiousness. Grateful for his generosity to other teachers. 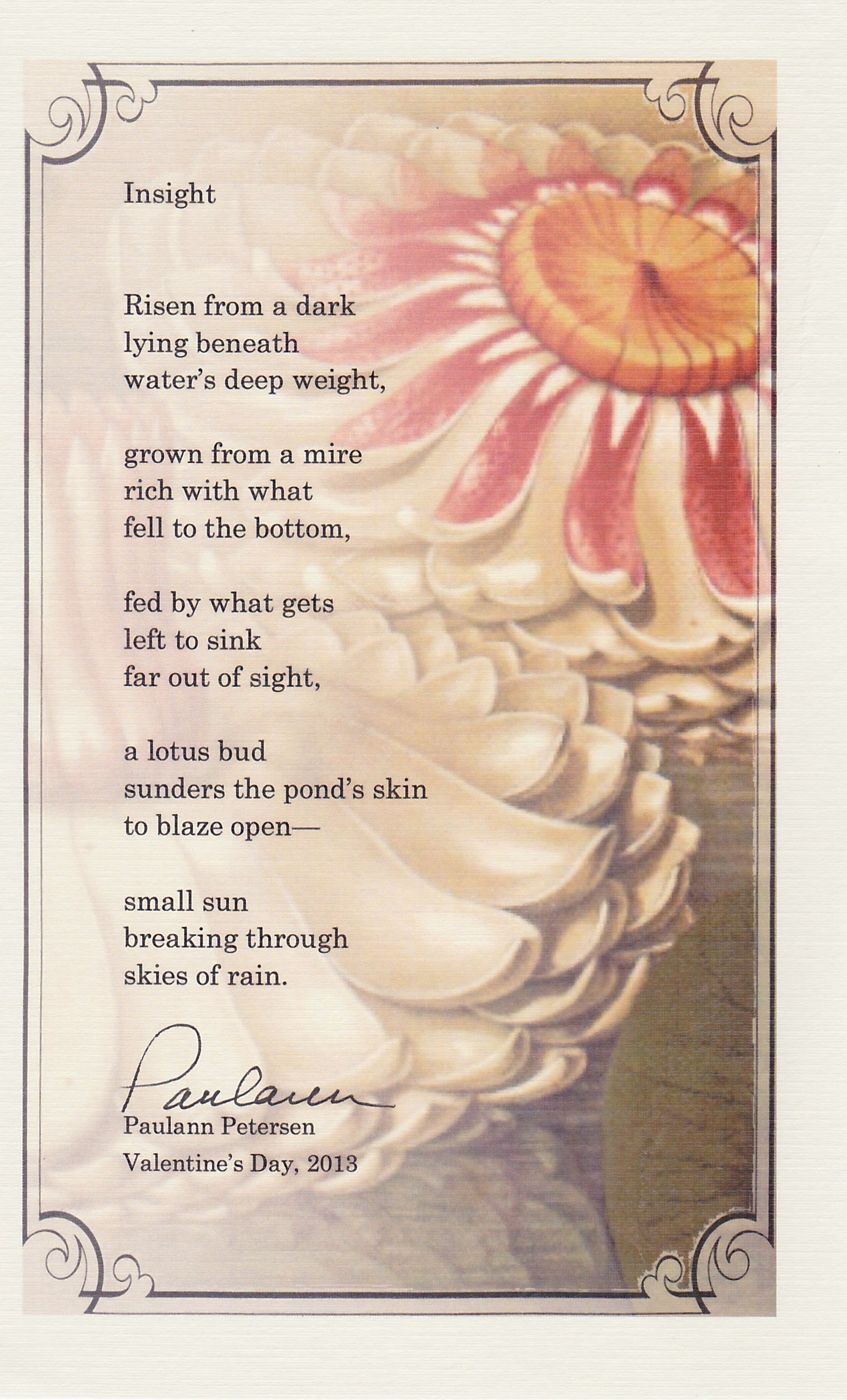 Oregon’s sixth Poet Laureate, Paulann Petersen, has published five full-length books of poetry, most recently The Voluptuary (Lost Horse Press). Her poems have appeared in many journals and anthologies, including Poetry, The New Republic, and Prairie Schooner, among others. A former Stegner Fellow at Stanford University and the recipient of the 2006 Holbrook Award from Oregon Literary Arts, she serves on the board of Friends of William Stafford, organizing the January Stafford Birthday Events.

Paulann’s poems “Appetite” and “Bloodline” will be featured in the complete Alive at the Center anthology as well as the Portland edition. Both books will be available April 1, 2013.